The Tibetans had set apart and classed their authentic "Dhokhi" "by size and function," which required that their mastiffs be capable of killing both man and beast in defense of their master’s family and property. It is absurd for the novice TM breed standard modifiers to attempt to lead anyone to reasonably believe that any dog under 26 inches could possibly be "more dangerous" and capable of killing both wolves and the snow leopard. Or to believe the ridiculous quantum leap of assuming that Marco Polo just happened upon the smallest of miniature Mediterranean donkeys, in the entire world, in a region where the Tibetan wild ass, Equus kiang (Kiang) and Onager where some of the largest donkeys when describing the TM as being: "A large breed of dog, so fierce and bold that two of them together will attack a tiger.

Marco Polo described Tibetan Mastiffs as being "tall as a donkey with a voice like a lion. Strong enough to hunt all sorts of wild beasts, particularly the wild oxen which are extremely large and fierce." At Kesang Camp we are defending the original Tibetan mastiffs in opposition to the much smaller, shepherd-like or chow-like "mongrelised dog show designer Do-Khyi standards. We believe this ever shrinking breed standard is being manipulated in favor of dog show revenue at the cost of forfeiting the Tibetan mastiff’s naturally intended Tsang-Khyi "working breed standard." We feel that the true and original TM breed is being done a grave disservice by the ever changing and shrinking breed standard and we are steadfastly pursuing the truest standard of origin, 26-31 plus inch livestock guardians of the old recently having been labeled as the rare "Tsang-Khyi" class of Tibetan Mastiff. These Tsang-Khyi dogs, which resembled lions, were said to actually be rakshasas in disguise, who could regain their enormous size and ferocious character for the protection of the Master and the Dharma.

Historical facts have proven this inferior 22-25 inches (58-65 cm) "Do-Khyi" breed standard to be more along the lines of a domestically altered and redesigned dog-show mongrel than the purebred Tibetan mastiff livestock guardian of old or dog of war. Are the responsible breeders those whose breed closer to the original breed standard? Or is it those  who accept and breed towards the ever changing and incredible shrinking mongrel designer show dog standard, as defined by elitists who care nothing about this breeds true origins? We’d strongly argue that the latter persons get out of this breed of dog instead of fraudulently altering, and making them absurdly more docile, simply to suit the show ring. From some of Clark's descriptions it is clear that they were formidable opponents.  one Buddhist monastery he encountered "the most savage dog we had yet seen. Like some monstrous, moth-eaten, four-legged, frothing gorilla, it had black pieces of wool hanging from its shoulders nearly to the ground. It was as big as any Saint Bernard."

The best description of the pure breed Tibetan Mastiff was given by W. Gill in his narrative of a journey through China and Eastern Tibet to Burma in 1880: "The chief had a huge dog, kept in a cage on the top of the wall at the entrance. It was a very heavily built black-and-tan, the tan of a very good color; his coat was rather long, but smooth; he had a bushy tail, smooth tan legs, and an enormous head that seemed out of proportion to the body, very much like that of a bloodhound in shape with overhanging lips. His bloodshot eyes were very deep-set, and his ears were flat and drooping. He had tan spots over the eyes, and a tan spot on the breast. He measured four feet from the point of the nose to the root of the tail, and two feet ten inches in height at the shoulder [34"]. He was three years old, and was of the true Tibetan [Mastiff] breed." 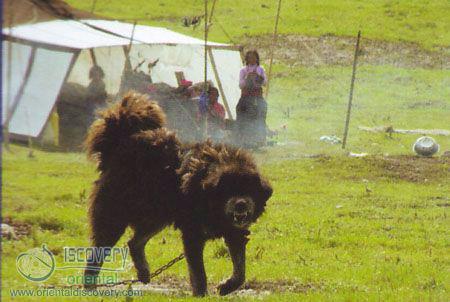